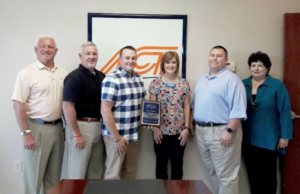 “We’re honored to be recognized for our safety record and we thank Great West for this award,” said ACT President & Chief Operating Officer Phil Wilt. “Dedication to safety is one of our five Core Values. We’ve pledged to go above and beyond what the law requires when it comes to keeping drivers safe on the country’s highways. We’re proud to receive an award that recognizes the hard work of our employees and contractors.”

The Workplace Safety Awards program recognizes trucking companies for their dedication to creating and fostering a safe work environment for their employees. Awards are based on a motor carrier’s year-end workplace incident rate. Carriers are eligible to receive a Platinum, Gold, Silver or Participatory award. This past year, the Workplace Safety Awards program drew over 125 participants from across the country.

ABOUT ACT
American Central Transport, Inc. is a dry van truckload carrier serving major shippers throughout the eastern half of the United States. Founded in 1926 as E.K. Motor Service, the company was later renamed after it was purchased by the Kretsinger family, who still run it today. ACT has been frequently recognized for its quality and premium service, signified by its “Raising the Standard” motto.