Truckload Carriers Association’s Past Chairmen’s Award Presented to Tom Kretsinger, Jr., Chairman of the Board and CEO for ACT 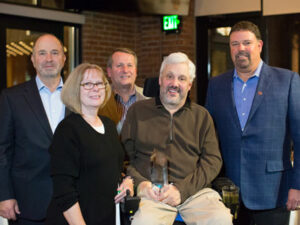 The Truckload Carriers Association (TCA) has bestowed its prestigious Past Chairmen’s Award on Tom Kretsinger, Jr., chairman of the board and CEO for American Central Transport (ACT) of Liberty, Missouri, and a former chairman of TCA from 2013-14. The presentation took place a few weeks ago at a special dinner in Kretsinger’s honor in Kansas City, Missouri. He was recognized again at the Annual Convention on March 27 at the Gaylord Opryland Resort and Convention Center in Nashville, Tennessee.

In 1981, after passing his bar exam, Kretsinger followed in the footsteps of his grandfather and father by joining the family law firm, Kretsinger & Kretsinger. The company had specialized in motor carrier law since the 1930s. In 1998, he joined ACT as general counsel and has since held several roles, including president, before being named to his current title. He holds a bachelor’s degree in political science from William Jewell College and a juris doctor from the University of Missouri-Kansas City School of Law. He also attended Harlaxton College in Grantham, Lincolnshire, United Kingdom, from 1976-1977.

Read the rest of the article HERE.